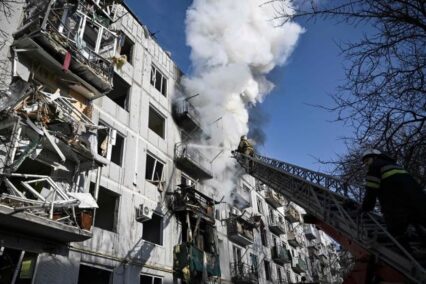 The World woke up to the news this morning that Russian Forces has invaded Ukraine and that there are explosions and fighting in many areas. The Nation of Ukraine is facing great uncertainty about their future, and we request urgent prayer for this situation.

“He maketh wars to cease unto the end of the earth; he breaketh the bow, and cutteth the spear in sunder; he burneth the chariot in the fire. Be still, and know that I am God: I will be exalted among the heathen, I will be exalted in the earth. (Psalm 46:9-10)

Ukraine was a part of the Soviet Union till the Iron Curtain came down over 30 years ago. Ukraine’s location as a gateway between East and West puts it in a vulnerable position, as the last 15 years have shown. According to news sources (BBC), Ukraine has demonstrated the willingness to stand up to outside interference in domestic affairs and in response, Russia annexed the Crimean Peninsula in 2014 and supported two pro-Russian separatist movements which seceded from Ukraine. This rebellion in the east by separatists who have fought Ukrainian forces in a war that has claimed 14,000 lives.
Late in 2021, President Putin began deploying big numbers of Russian troops close to Ukraine’s borders and this week he scrapped a 2015 peace deal for the east and recognised areas under rebel control as independent. The main reason is that Russia has long resisted Ukraine’s move towards the European Union and the West’s defensive military alliance NATO.
Announcing Russia’s invasion, he accused NATO of threatening “our historic future as a nation”.
See Map of Places of Conflict in Ukraine by BBC Below.

The Christian Background of Ukraine.

Thank God for the rich Christian heritage of both Russia and Ukraine as Christianity in the Slavic world began 1,000 years ago when Vladimir the Great called for a mass baptism in Kyiv, which is the capital of Ukraine today.

According to Operation World, Churches in Ukraine suffered greatly until independence (1991) and millions of Christians died, but the faithful perseverance of the Church now bears fruit. Today it impacts most of society. Evangelicals emerged from 130 years of persecution with larger numbers and stronger faith. Ukraine has a spiritual drive and vision present today that is different from generations before.

Both Russia and Ukraine have strong Pentecostal Movements and these movements suffered severely under the Communist regime but survived victoriously. Both Pentecostal movements are members of the World AG Fellowship.

According to their WAGF report, there are over 1,510 Pentecostal churches around Ukraine with more than 1,300 pastors supported by 1,600 deacons serving in the congregations. The Social Ministry of Pentecostal churches serves 42 rehabilitation centres, 16 orphanages, 4 elderly people’s homes and a ministry in 58 prisons.  There are over 38,500 children involved in Sunday schools, where over 3,520 teachers serve them. The Youth Ministry department holds an annual youth congress with over 7,000 participants developing their calling and gifts to spread Good News to the end of the Earth.
Ukraine is a missionary country and has sent over 300 missionaries, mostly to Russia, Bulgaria, Poland, etc.

Please pray for Rev. Mykhailo Panochko Stepanovych who is the Senior Bishop of this movement and other Pastors and that God would preserve the Church – for, there is more at stake for the Kingdom of God – that God will fulfil the destiny of this Nation.

We also seek your prayer for both Russia and Ukraine that God will bring unity and harmony among the people. Both nation’s Christians and Churches need God’s protection and that they together in Unity and Prayer will seek the advancement of God’s Kingdom.

As the threat of a full-scale was looming, Ukrainians united in prayer last week with representatives of various Protestant churches, pastors, preachers, and ordinary believers gathering together for prayer.
One leader prayed:

All-Ukrainian Council of Churches and Religious Organizations sent to the President Putin of the Russian Federation on February 23, 2022 “to stop the outbreak of war.”

Please Join in Prayer that:

For More Information on Ukraine on OPERATION WORLD.
On the Ukrainian Pentecostal Church:

The Map of Ukrainian Cities in conflict.

Prayer for the Hindu World