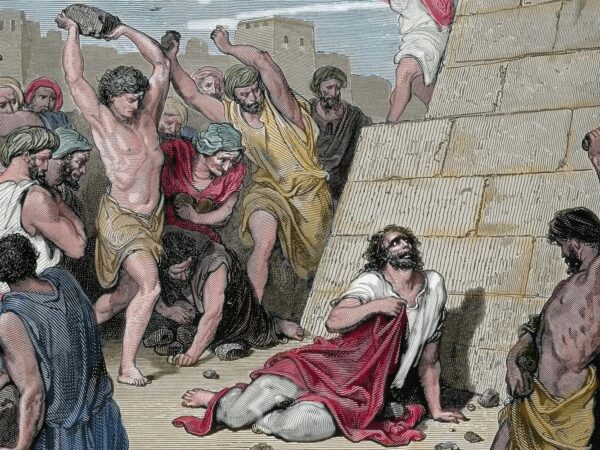 “I was formerly a Persecutor!”

Last month’s focus on Prayer for the Persecuted Christians highlighted the first words of the Ascended Lord to Saul the ‘Persecutor.’ This month we focus on the Lord’s second message to Ananias in Damascus giving him a Mission to Pray for the Persecutor.

Join us in the same Mission of praying for the persecutors around the world.

Ananias’ Mission to a Persecutor.

Can you imagine Ananias’s Prayer anticipating Saul of Tarsus now heading towards his city “breathing threats and murder against the disciples of the Lord?” But the Lord interrupted his Prayer directing him to a greater mission – the Persecutor’s transformation!

The Lord told him, “Go to the house of Judas on Straight Street and ask for a man from Tarsus named Saul, for he is praying. In a vision, he has seen a man named Ananias come and place his hands on him to restore his sight.” Acts 9:6.

This encounter near Damascus surprised and opened Ananias’ eyes to a new reality. His resentment towards Saul was overcome by a reversal of Saul’s position, “…for he is praying.”

God can turn Persecutors into Persuaders.

Persecution creates a heightened awareness in ‘persecutors’ against Christians, which equally creates an opportunity for them to experience a revelation of Christ. Paul later wrote:

“Although I was formerly a blasphemer, a persecutor, and an insolent man; but I obtained mercy because I did it ignorantly in unbelief.” 1 Timothy 1:12-15.

This mercy was extended to him by Stephen’s Prayer: “Lord, do not charge them with this sin.” (Act 7: 60)

Tyndale risked his life to translate the English Bible because it was banned in England.  He exiled himself in Germany to translate, print, and smuggle English Bibles to England. He was eventually arrested and tried, and on October 6, 1536, he was strangled and burned at the stake. His last prayer for his persecutors was: “Lord, open the King of England’s eyes.” Three years later, King Henry VIII required every parish church in England to make a copy of the English Bible available to its parishioners. Today if you read an English Bible, it is because of this prayer of Tyndale!

Assassins shot a Pastor and his wife in a city where intense persecution was prevalent.  He died instantly! His wife was seriously wounded and was on life support for over three weeks in a coma. While many churches prayed for her recovery, in one prayer meeting, we prayed “Lord, restore her because she is the only one who can release forgiveness to her husband’s killers.”
The Lord answered that prayer and she came out of life support next week and within a few weeks, she recovered. Later, she was called by the courts to identify the suspects for her husband’s murder. Knowing that her testimony would sentence them to life imprisonment, she asked my advice on what she should do.

This situation was a test of my attitude towards persecutors, and several thoughts ran through my mind. I wanted to be vindictive because I was angry, wanting divine retribution because of the trauma and suffering of this widow. I also wanted swift justice and severe punishment.

However, despite my feelings, she decided to show mercy and decided not to testify!

Later as I read 1Peter 2:21-23 I realized that she had followed Christ instead of my human feelings:

21 For to this you were called, because Christ also suffered for us, leaving us an example, that you should follow His steps: 22 “Who committed no sin, Nor was deceit found in His mouth”; 23 who, when He was reviled, did not revile in return; when He suffered, He did not threaten, but committed Himself to Him who judges righteously;

How do we pray for Persecutors?

Persecutors generally are sincere seekers who are deceived into believing that their actions are correct, and they do it passionately. Jesus said that

“the time is coming that whoever kills you will think that he offers God service.” (John 16:2)

I have spoken to converts who formerly persecuted Christians and even heard of ISIS, Al Qaeda, and Taliban converts who ardently believed their cause was right. Yet, God’s mercy reached out to them.

Jesus Prayed for His persecutors.

Although being persecuted from birth to death, Jesus never harboured anger or resentment and forgave them on the cross.

When meditating on Jesus’ resurrection, we see his loving attitude towards his persecutors. It would be natural to expect Jesus after His glorious resurrection would immediately choose to appear to the High Priest, the Sanhedrin, or even to Pilate to vindicate himself. That would have been a spectacular victory for Christians!  Instead, he first appeared to Mary Magdalene, a weak woman who could do nothing against His persecutors!

Further, It is clear from all accounts that Jesus only appeared to the ‘brethren’ (Acts 1:3, 1 Cor 15:6) and not to his persecutors.  Why? He was not vengeful but merciful. His disciples too would express the same love to their persecutors.

The early Church responded in Prayer.

Christians experienced tremendous persecution for three centuries and expressed the attitudes of forgiveness and mercy. They survived triumphantly! However, once the Church became a powerful institution in the Middle Ages, they responded to persecution differently. Centuries of suspicion, prejudice, and hatred has created strong resistance to the Gospel in many Moslem nations due to this. History may have been different if they followed the words of Jesus to pray for persecutors.

“Blessed are you when people insult you, persecute you and falsely say all kinds of evil against you because of me. 12 Rejoice and be glad, because great is your reward in heaven, for in the same way they persecuted the prophets who were before you. (Matthew 5:12)

“But I tell you, love your enemies and pray for those who persecute you, 45 that you may be children of your Father in heaven.” (Matthew 6:44-45)

Praying for Forgiveness and Blessing.

In a social climate where justice predominates, suffering injustice naturally creates emotional and mental pain appealing for due process. Recently a pastor whose church was attacked and destroyed asked me to pray with him. As we prayed, the outpouring of his pain tainted his prayer with vindictiveness, seeking God’s wrath against his persecutors.

I had to correct him and ask him to bless them and pray for forgiveness. Initially, he expressed reluctance but eventually it relieved him from his pain as he identified with Jesus and the blessing and glory promised to those who suffer as Christians. (1 Peter: 4:14) )

“Bless those who persecute you; bless and do not curse” Romans 12:14

There was a significant impact when persecutors were converted, as seen in the immediate consequence of Saul’s conversion.

“Then the churches throughout all Judea, Galilee, and Samaria had peace and were edified. And walking in the fear of the Lord and in the comfort of the Holy Spirit, they were multiplied.” (Acts 9:31)

Let us pray for exponential growth resulting from the conversion of persecutors.

Finally, the persecuted can impart a blessing to persecutors, one of Christianity’s most powerful attributes.

“Do not repay evil with evil or insult with insult. On the contrary, repay evil with blessing, because to this you were called so that you may inherit a blessing. 1 Peter 3:9

This also has a blessing in reverse, which sustains the persecuted during challenging times.

The Pastor’s widow in the above story who released forgiveness was invited to share her testimony at a Pastor’s meeting in South Korea. A widow of a South Korean Pastor, whose husband was killed by North Koreans had been highly traumatized and was in a state of shock, unable to talk for some time. As she heard this story, she too decided to release forgiveness, and the Lord healed her almost immediately from her trauma, helping her to move forward in hope.

Forgiveness and blessing can do more than justice.

Let us Pray for the Persecuted:

“Father, we release your Mercy to the Persecutors around the World.
Help us to have a Christ-like attitude as we pray for them. We know that Jesus did not revile or demand justice but were willing to show Mercy and forgive persecutors.
Father, we realize that persecutors are doing this in ignorance, and we pray like Jesus did: ‘Forgive them, for, they do not know what they are doing.”
We pray like Stephen: “Lord, do not charge them with this sin.” We pray that persecutors will have supernatural encounters with you and turn to you in faith.  We also pray that Churches will experience supernatural growth and multiplication.  We pray in faith and in love, in Jesus’ Name. Amen.